As Manhattan Beach flourished in the 1950s, the school district purchased land in the southeast portion of Manhattan Beach to build a new elementary school. Construction began in July 1954. At the district’s direction, contractors utilized a unique building technique known as “Lift-Slab” to build the school. The technique involved pouring the roof on the floor slab and then raising the roof in one piece. This allowed the walls to be easily removed to extend or contract classrooms as demographics changed. The District received a commendation from the magazine “School Executive” for this farsighted and unique architectural design. The school, which opened in August 1955, was initially known as Curtis St. School. The original school included 12 classrooms, 2 kindergartens, a cafeteria-multiuse room, a miniature outdoor amphitheater and an administration/health building. Ed Greenblat was the first principal. 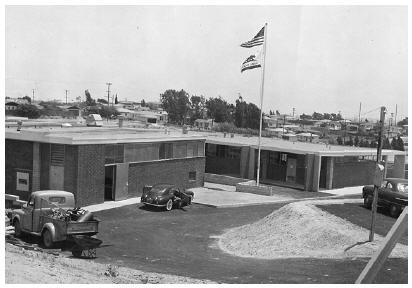 On November 16, 1955, Curtis St. School was renamed Aurelia Pennekamp Elementary School. The name was chosen to honor Aurelia Pennekamp, who served the Manhattan Beach School District for over 30 years. Miss Pennekamp was born in Topeka, Kansas on April 27, 1895. Her family was one of the early settlers of Palos Verdes where her father was a bookkeeper for the Palos Verdes Land Project. Miss Pennekamp, who was known to her friends as "Penny" began her career with the District in 1926 as a part-time nurse at Center School, now Pacific School. In 1946, she began serving the District as a full-time nurse. Subsequently, she was a nurse inspector and during the 1950s was promoted to the position of District Health Chairman. It is said that superintendent Foster Begg consulted Penny on every move until she retired in 1953. Aurelia Pennekamp passed away on October 5th, 1976 in Piedmont, California. 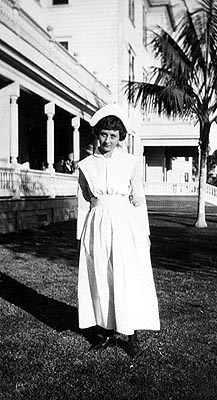 Over the years Pennekamp Elementary has continued to grow. In November 1956, three additional classrooms were completed. In the late 1990s portable classrooms were added to the site. The school has increased to an enrollment of just under 600 students. Many beloved teachers have served Pennekamp students over the years. In the early days teachers were required to live in the District and many boarded with families in the community. The teachers were required to teach Sunday school at the Manhattan Beach Community Church and were not permitted to marry. Today, Aurelia Pennekamp Elementary School is a thriving community of students, parents, teachers and administrators. Dr. Toni Brown serves as the school’s ninth principal and under her guidance the school has achieved academic excellence while emphasizing character and good citizenship amongst its students.
The photo to the right was taken at her graduation from nursing school in San Diego circa 1922. 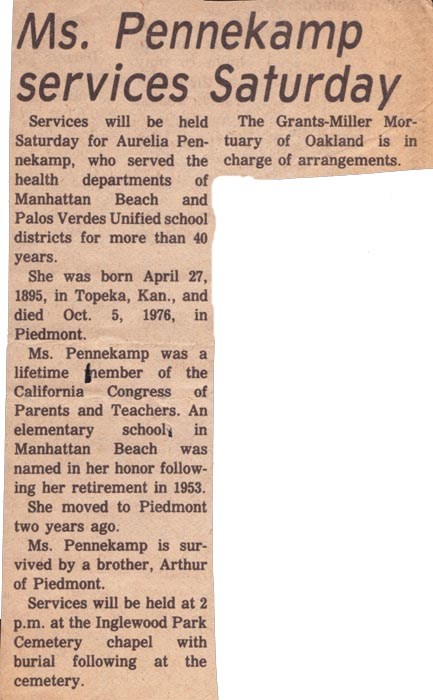 We would like to acknowledge Helen Sinsabaugh (1908 - 2000), legendary South Bay educator in English and journalism for providing the photos and information for this page.